Measuring the output VSWR of a conventional LNB is a challenge in the lab and in the field because most LNBs require DC and sometimes 10 MHz reference signals to be multiplexed on the RF output.

If you use a conventional vector network analyzer you will need to use a BiasT, Diplexer or a Mux-Tee to insert DC onto the cable to power the LNB. 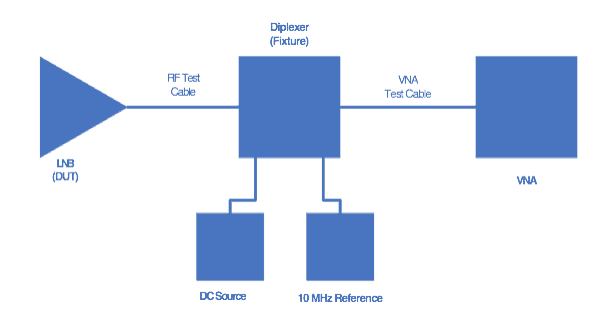 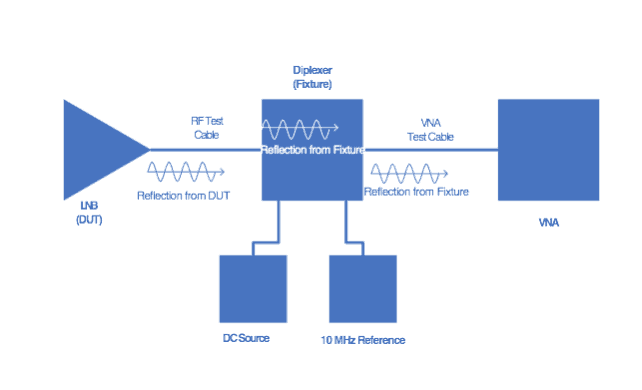 There are 3 good solutions to this problem:

1. Use a VNA with a built-in BiasT – such as the Keysight PNA series of VNAs

In these instruments the BiasT is installed behind the measuring receivers and therefore does not impact the signals that are sent or received between the VNA and the LNB. The VNA is simply calibrated normally for the frequency band you are interested in measuring (usually L-Band), plug into the LNB and then apply power to the Bias Input (be careful not to try to use your calkit while the DC Bias is applied. We always keep spare fuses for the Bias In on-hand). 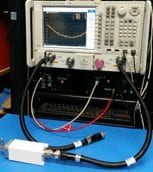 2. The second option is to “de-embed” the BiasT or Diplexer.

Some VNAs can either automatically de-embed fixtures and connectors for you to remove the effects of items between the VNA calibration plane and the input to the DUT. This is handy when measuring VSWR on waveguide inputs as you can quickly calibrate the reference plane on the coaxial connectors of the end of the VNA cables and then use a waveguide transition that you have measured S-parameter files for. By de-embedding you can program the VNA to remove the effects of the fixture and move the reference plane to the DUT end of the fixture. A BiasT or Diplexer can also be parameterized and de-embedded. This will work well if the frequency response and VSWR of the BiasT is significantly better than the DUT – otherwise you might see “noisy” or somewhat more erratic results. Remember that all adapters and connectors in the chain can have an impact on the VSWR and should be included as part of the fixture. 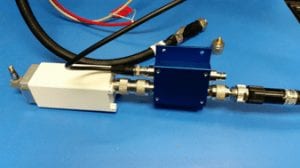 LNB shown with an Orbital Mux-Tee (the fixture) 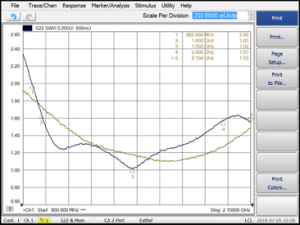 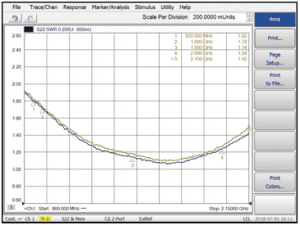 The diagram above shows a comparison of the de-embedded VSWR with a fixture vs. the VSWR with the VNA internal BiasT.

3. The final recommended method is the “old school” approach.

Use a dual directional coupler between the BiasT and the DUT and measure the forward and reverse power. The measurements can be done with spectrum analyzers, power meters or diode detectors as used with scalar network analyzers. The return loss then is simply the forward power minus the reverse power measured. 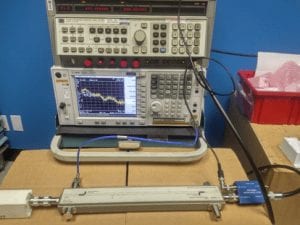 To make the measurements quicker, scripts can be generated in Excel, Python or Matlab to pull the data from the test instruments. Keysight’s Command Expert is an excellent tool to find the commands and check them against a live instrument. It also can generate the code required for many platforms including Python.

See an example Python script to measure VSWR with a spectrum analyzer.

Orbital Research Mux-Tees (diplexers that allow insertion of 10 MHz and DC while passing through the L-Band LNB output) have typical return losses of greater than 20 dB, which can be more easily de-embedded. Contact us for more information about Orbital’s Mux-Tees.